You are in: Case Studies > Homeopathic treatment of Deep Vein Thrombosis

I was called to see a 34 years old male patient who was admitted at a leading private hospital in Bombay for the treatment of deep vein thrombosis of his left leg.

The problem had apparently begun in May 1995 when he developed pain and redness of the left calf region. This had gradually worsened even though he was being treated with anti-coagulants and had reached a point where he had severe pain in the Lt. thigh that soon spread all the way down to his foot. He therefore was admitted and had an angioplasty on July 13, 1997.

When I visited him in the hospital, he was in great pain, esp. around the lt. ankle. He felt a burning pain, like sparks of fire worse walking and overexertion and better by pressure (of stocking) There was a swelling around the ankle.

The Color Doppler studies done after the angioplasty on July 14 showed DVT of the Lt. external iliac, posterior tibial and other veins of the lt. lower limb.

On the basis of the inflammation of the veins with thrombosis and the history of trauma (angioplasty) the drug selected for him was Hamamelis (the Aconite of the veins). This was given in the 30C potency q. i.d. initially and later the potency was increased to 200C.

After two weeks of Hamamelis, he recovered to the extent that he could come walking to my clinic for the follow up and long-term treatment. He had brought with him a fresh Color Doppler that showed a residual thrombus in the veins with a few recanalized flow channels.

These were the other complaints:

For the past ten years, he has been suffering from a degeneration of the hip and vertebrae causing a backache with a pulling sensation on the lt. side and a tingling in the lt. lower limb. This was sometimes associated with a swelling over the calves.

These symptoms were worse in the evening and on 1st motion and were better by lying down, hot fomentation, massage and continued motion.

He also had a pain in the lt. shoulder occurring at least once a month. This was associated with cramps in the lt. side of the neck, which would then appear to be swollen. The movements of the shoulder were painful and restricted and were worse at night, initial motion and better by heat and continued motion.

He was a chronic smoker and also chewed tobacco. His business required him to entertain clients in his office and so he had at least 8-10 cups of tea every day. His appetite was good and he would be irritable if he did not eat on time. He craved sweets, cold milk and fried food. His thirst, bowel movements and urination were normal. The tongue was clean but fissured. He often had a cold sweat on his palms.

He described himself as a happy go lucky person and was generally a mild person. However, since his hospitalization, he had become irritable, esp. from noise. He would shout and scream from anger. He had a good memory and a very good confidence in his abilities. Lately, however, he felt a bit worried about the future. He wondered if his illness would come in the way of his capacity to earn a living. He had a fear that if the disease reached a point where he would need to be operated again or was bed ridden, he would lose all his business and would soon be a very poor man.

Treatment: Considering the underlying miasm; the location- veins and joints; the pathology- thrombosis in the veins and degenerative arthropathy; the mind- fear of poverty, and certain signs like the fissured tongue and past history of severe bleeding piles the drug Calcarea fluorica was selected for this patient. It was given in the 200C potency, 3 times a day for 1 week on July 30, 1997.

His serial colour Doppler studies are given below: 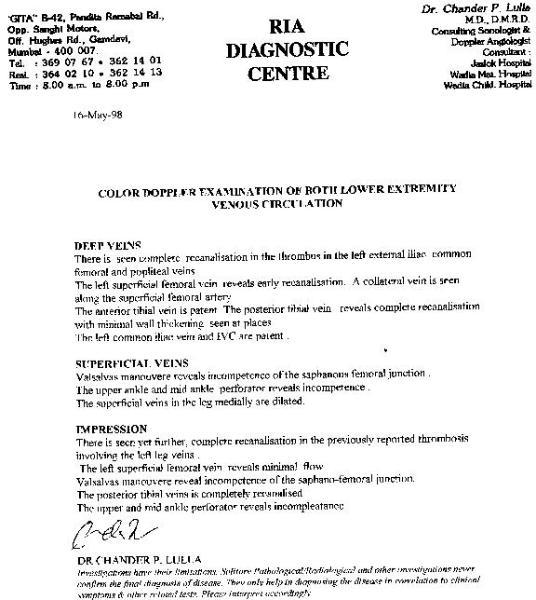 "Internationally renowned teachers of homeopathy and experienced in healing thousands of people globally for over 37 years."

Daxa & Vijay Vaishnav bring a rich experience of healing thousands of people globally for over 37 years. They are both Homeopathy M.D.'s (from India) and Certified Classical Homeopaths (USA) and also internationally renowned teachers of homeopathy, who have taught in India, Austria, the United Kingdom and the United States.

Their solid background and training in the clinical sciences, combined with their vast clinical experience, sets them apart as skilled and proficient practitioners of Homeopathy.